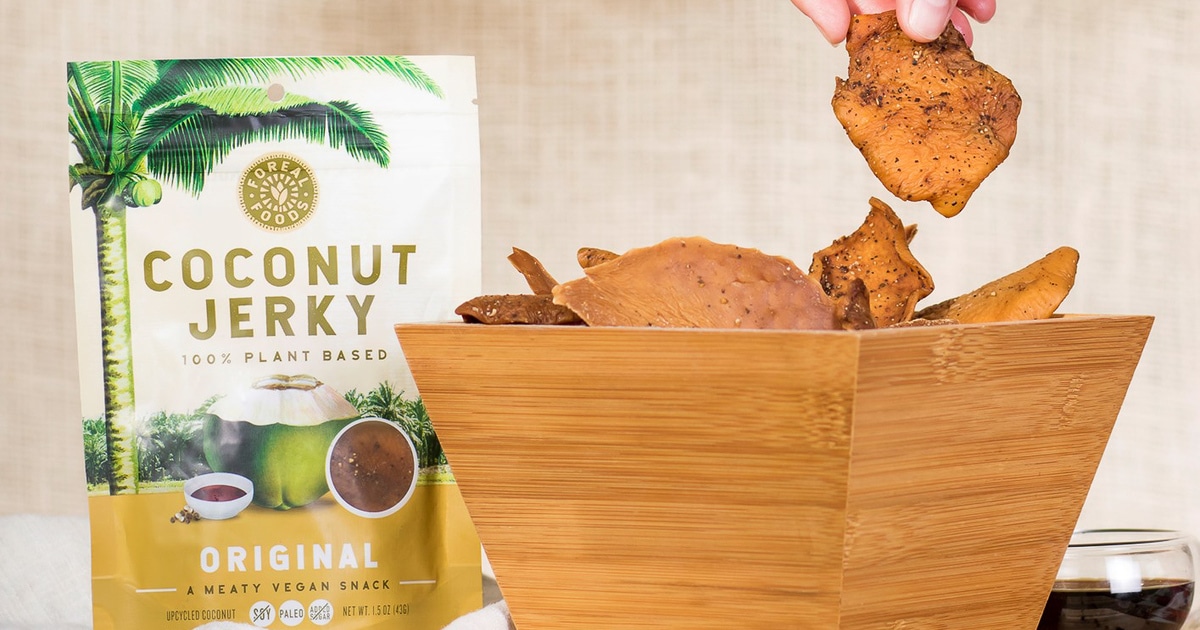 18 Vegan Jerkies That Prove Plants Are the Ultimate Protein Snack

Our ancestors preserved meat for obvious reasons: food was scarce, winters were long, and travel required portable, compact and durable food. For these reasons, jerky was a staple long before paleo dieters made it the snacking trend it is today. However, it also creates a livestock industry that is bad for our health, the planet and the animals. Dried animal products get their flavor (smoky, spicy, sweet) from plants, so why not go straight to the source (cruelty-free) for a jerky that ticks all the boxes? While consumers might view animals as the only “meaty” option for making jerky, the terrestrial and marine plant kingdoms offer far more variety, flavors and textures because, of course, everything that foods d can do, plants can do better. . And for the vegan jerky category, the proof is in the chewing. With that in mind, we’re spotlighting 18 innovative vegan jerkies that could shake up traditional animal-based jerkie sales.

Herbivore Butcher’s chewy and flavorful jerky is made with seitan and comes in three flavors: Teriyaki Jerky, Sizzlin’ Cajun Jerky, and Salt ‘n Peppa Jerky. “Honestly,” says Kale Walch, co-founder of The Herbivorous Butcher, “I think ours is tastier and the texture is just right. Some people may not like that ours is more realistic in texture, but features different for different people.
Learn more here

This jerky is made from mushrooms and kelp, which makes it high in fiber and protein, while being low in calories, sugar and fat. The world’s first carbon-negative snack, you can rest easy munching on this innovative, protein-rich kelp jerky.
Learn more here

Gourmet-made, Noble Jerky is made from soy protein, resulting in a smooth, smoky, protein-rich taste. Vegans and omnivores alike are sure to appreciate the authentic taste of the line’s Sweet BBQ, Chipotle, Teriyaki and Original flavors.
Learn more

With flavors like Maple Bacon, Smokey Carolina BBQ and the limited edition Sesame Gochujang, this non-GMO textured soy protein jerky is all chewy and full of flavor.
Learn more here

These individually wrapped jerkies are made with soy, seitan and shiitake mushrooms. Flavors like Thai Peanut and Texan BBQ make this a perfect portable snack for travel, backpacking, or to keep in your bag for emergencies.
Learn more here

Supported by shark tank billionaire Mark Cuban, this vegan jerky is made with shiitake mushrooms for a tasty snack rich in umami. Flavors include Original, Zesty Thai, Applewood BBQ, Salt & Pepper, Teriyaki and Curry. Stock up for your next road trip!
Learn more here

Coconut doesn’t just lend itself to milk, water, ice cream, and cheese, it’s also a natural jerky. To perform the transformation, the young coconut meat is marinated and dehydrated for a healthy and addictive jerky.
Learn more here

Made by world-renowned chefs, Moku Foods plant-based jerkies are simply delicious. Made in three iconic flavors (Original, Hawaiian Teriyaki, and Sweet & Spicy), this meatless jerky owes its meaty bite to mushrooms. Plus, 1% of every purchase is donated to a non-profit organization of your choice.
Learn more here

Famous for its fan-favorite vegan fried egg, BeLeaf’s line of plant-based jerky is another must-have for any vegan pantry. Made from soy protein, the company offers flavors including Spicy, Wasabi, and Original.
Learn more here

13 Beyond the cured meat

The brains behind the famous Beyond Burger are now making vegan jerky. Made from peas and mung bean protein, flavors include Original, Hot & Spicy, and Teriyaki.
Learn more here

This vegan OG will not be outdone. Launched in 2020, Gardein’s Smoked Jerky is made with seitan for added chewiness and meaty reality. Choose between original, teriyaki, and hot and spicy flavors the next time it’s snack time.
Learn more here

The snack brand KRAVE ventures into the world of plant-based food with its range of vegan jerky. Made from a blend of peas and beans, each serving contains 8 grams of protein. The smoky Chipotle flavor is sure to satisfy, but the Korean barbecue can’t be missed.
Learn more here

Get FREE vegan recipes delivered to your inbox by joining our award-winning VegNews recipe club.

Get FREE vegan recipes delivered to your inbox by joining our award-winning VegNews recipe club.