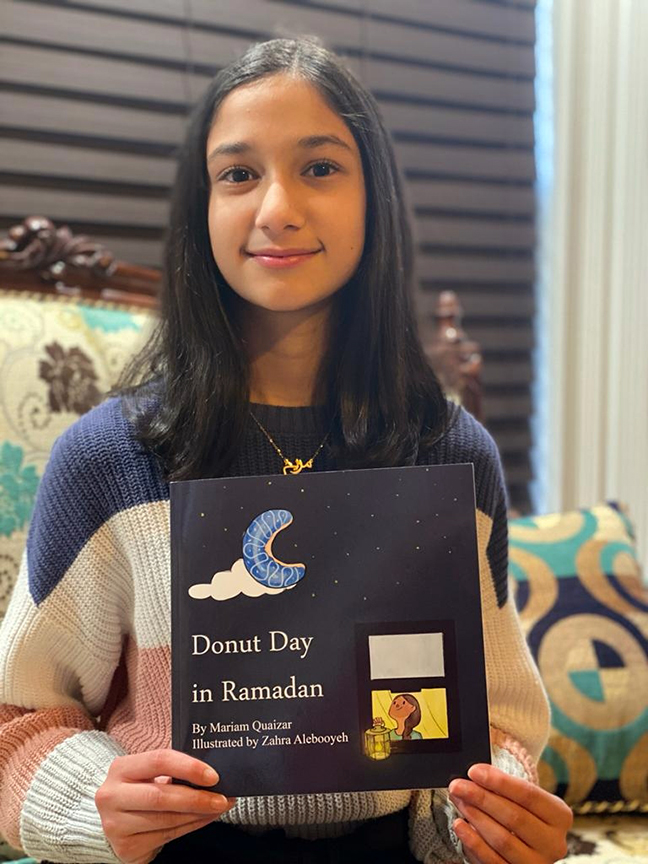 “Donut Day in Ramadan,” a children’s book written by Quaizar, a freshman at Edwardsville High School, tells the story of Zehra, a Muslim American girl in middle school.

It’s Ramadan and Zehra is fasting all month, but Zehra has a major dilemma.

Donut Day is approaching and Zehra is faced with the ultimate choice: should she fast or should she eat donuts with her friends?

The story, which takes place in Glen Carbon and Edwardsville, is based on real events.

“It started as an extra credit opportunity in my seventh-grade language arts class with Ms. (Cynthia) Hoxsey at Lincoln Middle School,” Quaizar said. “After submitting it, my story was selected for the Illinois State Young Authors Conference.

“I wanted to write a story about something I had been through and it wasn’t really about donuts, but it was something like missing out. Since the book was published, so many other Muslim children have told me that they can really understand the difficulty of explaining fasting to their friends.

As noted on the book’s back cover, “Not Doing Ramadan Day” is about Zehra navigating between her friendships and her faith.

“Zehra has a major dilemma and it’s important to understand why it’s a dilemma,” Quaizar said. “No matter what she does, she’ll feel like she’s missing out on something important. People around her might not understand what she’s going through and that’s what really got me going. to write this book.

Quaizar added that she was encouraged by her parents, Dr. Huzaifa Quaizar and Saba Fatima (associate professor of philosophy at Southern Illinois University Edwardsville), to write about her experiences and turn them into a children’s book.

“They motivated me so much and I don’t know what I would have done if they hadn’t,” Quaizar said.

A family friend, Zahra Aleboyeh, did the illustrations for “Donut Day in Ramadan”.

“She’s a friend of my mom’s sister and she’s an artist, and she agreed to illustrate the book for me,” Quaizar said. “It was nice to have someone who was related to my family and could do that.”

Once Quaizar began to turn her story into a book, she went through a long process of editing and revising before completing the final version.

“I started about a month in advance before the deadline, and during that month I had many revisions,” Quaizar said. “When you’re writing this book, because it’s based on real events, you have to make sure that the wording is correct, so that no one misunderstands anything.”

“Donut Day is Ramadan” available online via Amazon at Donut Day in Ramadan – Kindle Edition by Quaizar, Mariam, Aleboyeh, Zahra. Kindle eBooks for Children @ Amazon.com. The cost is $7.99 on Kindle or $9.99 on paperback.

Early reactions to the book online have been positive, with three readers giving it a five-star review:

“This story is fun, well written and informative. This concerns not only Muslims, but also all those who feel different from others in their own way. I highly recommend it to readers of all ages and walks of life.”
“The story is well thought out and accessible to children. The story from the children’s point of view and follows their experience of living in the west. I would highly recommend this book to all Muslim children.
A wonderful book for Muslim children growing up in Western countries.
Quaizar, meanwhile, noted that the book includes phrases in Arabic or Urdu. Urdu is the official national language of Pakistan and has 70 million native speakers.

“At the back of the book, there is a glossary of some of the language terms that are used in Muslim homes in reference to fasting, in Arabic and Urdu. It explains all of these things in a bit more detail,” Quaizar said.

“Ramadan, for example, is the name of the Islamic month in which Muslims fast, and although its origins may lie in the Arabic language, it is a term used by all Muslims. Many of the terms in the book are Arabic, but these are basic terms that every Muslim knows and uses.”

Having the book located in Glen Carbon and Edwardsville is especially meaningful to Quaizar, who was born in New York and lived briefly in Kentucky before calling Edwardsville her home.

“My husband’s family is from New York and I’m from Pakistan.” said Saba Fatima, Quaizar’s mother.

In addition to five-star reader reviews on Amazon, Quaizar is also pleased with the reception the book has received locally.

“It makes me happy that a lot of people, especially Muslim kids, can relate to that,” Quaizar said. “I think it’s a big accomplishment for me in general. This book makes me want to write a second book about my experiences.

In addition to her writing skills, Quaizar is also an athlete and competed for the EHS women’s cross country team last fall. She had hoped to make the women’s track and field team this spring, but a hip injury will keep her from running.

“Hopefully when I get over this I’ll be doing cross country again next fall,” Quaizar said. “I love to read and just found out that I rank first out of 608 freshmen in my class (academically), which is really surprising to me.

“I also do martial arts. I’m a brown belt now and will be taking the black belt test soon.

If Quaizar writes a second book, she will be sure to find inspiration.

“A lot of Muslim kids go through things because they feel different,” Quaizar said. “During the cross-country season, there was an experience that I want to write about. I hope my first book will inspire many Muslim children to talk about their experiences as well.