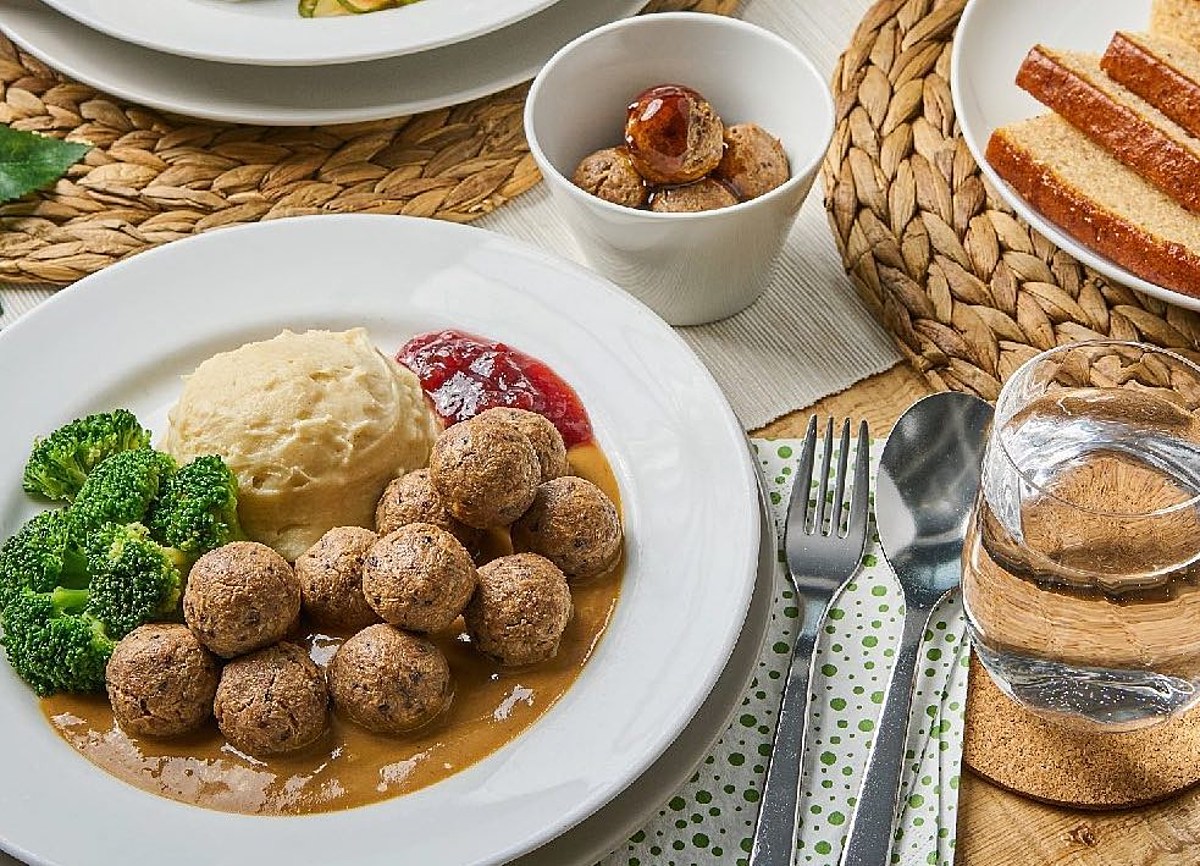 Every die-hard IKEA fan knows that behind the affordable and timeless ready-to-assemble furniture, the in-store restaurant is the main attraction. The IKEA cafeteria offers several plant-based staples, including a vegetarian hot dog made with wheat protein, kale, lentils, onions and wheat protein. Now, the Swedish-based multinational is aiming to bolster its plant-based offerings as IKEA cafeterias begin to reopen post-pandemic. More recently, the company showcased 3D-printed meatballs during its “Taste the Future” recruitment campaign.

IKEA has launched an initiative to make all its restaurant menus 50% plant-based by 2025, to promote sustainable food options around the world. The recruitment campaign also aims to expand its technology and data department as IKEA tries to innovate across its development and production models.

The company is hiring 150 new employees to facilitate a sustainable future for IKEA. The campaign video shows the new machine that makes Swedish plant-based meatballs, while a voiceover says, “Let’s meet for a job interview over 3D-printed meatballs.” Yes, of course, they are meatless.

3D printed Swedish meatballs contain a proprietary protein blend of potato, onion, apple, oat and pea. IKEA claims that its vegan meat production produces only 4% of the environmental damage needed for standard meatball production. As of now, the new plant-based meatballs have yet to hit IKEA stores, but the sustainability initiative gives consumers reason to expect vegan meatballs in the near future. to come up.

“IKEA is at the start of a journey to embrace data and technology to become more affordable, accessible and sustainable in an omnichannel environment,” said Pascal Pauwels, CIO of Inter IKEA Group. “Naturally, people with imagination will play a big role in this quest, so we’re looking for people here who want to create a better everyday with us. This campaign is a great conversation starter.

The company’s sustainability commitments extend beyond the restaurant. IKEA has pledged to ensure that 80% of all packaged food stocked in its retail category is plant-based and meat-free. New menu items and the development of plant-based retail are just the start of IKEA’s sustainability programs. The company aims to become “climate positive” by 2028, striving to achieve net zero greenhouse gas emissions and completely phase out plastic packaging.

“The 3D printed meatballs are just one experiment in which IKEA explores new technologies to bring its vision to life. All of this to reach more people and create a positive impact on the world,” the company said in a statement.

Current estimates suggest that animal agriculture could be responsible for 87% of greenhouse gas emissions in the international food sector. As environmental issues become more prevalent, IKEA’s plant-based and sustainable investments will set standards for leading companies in Europe and around the world.

IKEA’s investment in 3D-printed meat substitutes is not a first in the plant-based world. Last year, chef Marco Pierre White revealed he would start selling 3D-printed whole cut steaks that are completely free of animal products. The celebrity chef announced that he had partnered with Redefine Meat which would replicate the complex structures of animal muscles with mushroom-based ingredients, noting the nearly identical texture of the vegan alternative.

Redefine Meat and IKEA’s 3D printed meat alternatives are entering a rapidly growing plant-based market, which is expected to grow 451% by 2030. New 3D food printing technology aims to cut costs harmful environmental. This week, a report from the Good Food Institute claimed that plant-based meat will reach price parity with conventional meat as early as 2023. The report claims that increased consumer interest, technological advancements and improved production capabilities will drive to the market eclipsing the conventional meat market.

Fast food restaurants have finally gotten the message that their customers don’t just come for a burger, fried chicken or beef taco. Many now have plant-based foods and come up with creative and delicious ways to add more greens to the menu. Here are the 6 best fast food chains with plant-based options on the menu.