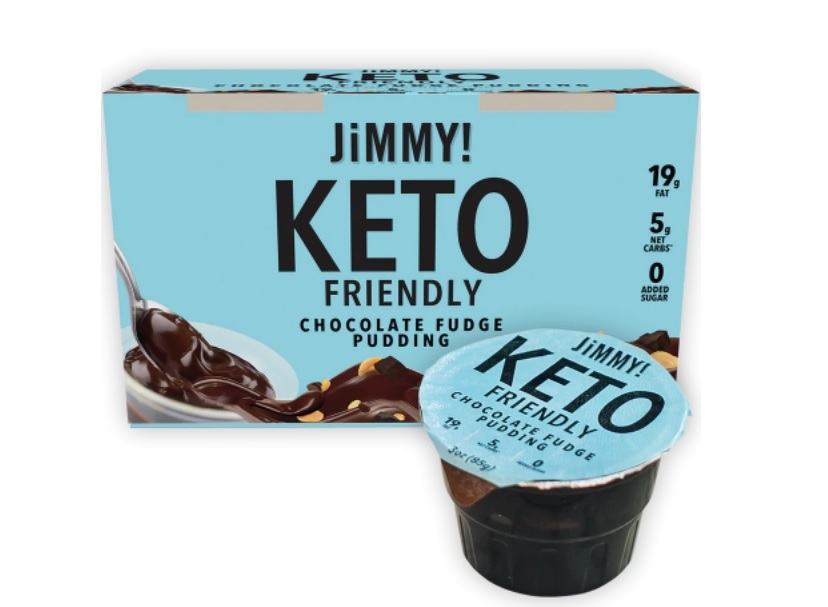 At Natural Products Expo West, the quantity and diversity of products making keto claims were “a real revelation”Nicholas Fereday, executive director of RaboResearch Food & Agribusiness at Rabobank and consumer food expert, wrote in a recent report encouraging the return of trade shows.

He noted that there was “so much keto” at the show, with brands showcasing keto snack bars, keto puddings, keto candies and keto bread, that he wondered if “perhaps we are witnessing the second coming”of keto.

Indeed, a report from Grand View Research suggests that consumer interest in the keto diet is not waning, but rather on the rise – boosting compound annual sales by 5.5% from $9.57 billion in the world from 2019 to 2027. While supplements may account for the bulk of sales (at 50%), keto snack sales are expected to top the overall category with a projected CAGR of 6.1%, according to the report.

Among the companies lured by the market potential and health promises of keto is JiMMYBAR!, which cut its teeth in the keto space in 2018 with the launch of three popular snack bars formulated for the diet.

Encouraged by sales, consumer feedback and personal success with the diet, the company is now expanding beyond the bar category into decadent dessert cups and, perhaps soon, into other categories. traditionally taboo for keto followers.

“The younger generation eats with more purpose than, say, I did when I was younger and I would eat a Twinkie without thinking about it. But today people want to benefit from what they eat or drink…and they understand that food is medicine,”​ Jim Simon, co-founder and CEO of JiMMYBAR! says FoodNavigator-USA.

He explained that this mentality is what prompted JiMMYBAR! in 2018 to reposition its decadent but better-for-you bars to focus on the functional benefits of their key ingredients – whether it’s a high dose of vitamin C to boost immunity, caffeine for focus, of turmeric for recovery or a combination of high-protein and low-carb to aid in weight management while adhering to keto guidelines.

As dedicated as many modern consumers are to following healthier diets and taking advantage of functional ingredients, they are still susceptible to the same cravings for sweets and carbs as the generation before them.

With JiMMYBAR!’s new dessert cups, consumers don’t have to choose between healthy benefits and a sweet treat, Simon said.

“Our dessert cups are kind of like a really thick chocolate ganache or pudding that you can eat straight from the cup or use as a spread or even as a base for a delicious yet still supportive smoothie in weight loss or weight management. weight because it has no added sugar and only a few hundred calories per cup. So it really solves that sweet craving when you really want to eat a big bucket of ice cream,”he explained.

Cups control net carbs at 5 grams per serving by blending soluble corn fiber with peanut butter, coconut oil and ghee and relying on allulose, erythritol and stevia for sweetness. To recreate the mouthfeel and creamy texture associated with pudding, the cups use organic guar gum, organic acacia gum and xanthan gum.

Each cup also contains 19 grams of fat, including 13 grams of saturated fat, 19 grams of dietary fiber and 4 grams of protein.

While some dietitians may question the health impact of the 13 grams of saturated fat and 19 grams of total fat in the cup, they would likely find fewer flaws in the 5 grams of sugar in the dessert, neither of which is added sugar.

Unfortunately, he acknowledged, sugar also tastes good. But he added that sweeteners, including allulose, have come a long way to replicate what people love about sugar and remove what they don’t without any other compromises, like off-notes or performance issues.

Encouraged by the initial success of dessert cups and the first foray of JiMMYBAR! Outside of the bar category he first got into, Simon said he sees significant potential for the company to address other common issues for keto enthusiasts.

“The three things you miss when you’re on a keto diet are sweets, pizza, and alcohol,”said Simon, noting that the company is already tackling the former with its dessert cups and now has its eye on the latter.

“We flirt with a keto pizza, and a few other categories that I can’t name yet, but that we like to eat out”or cheat day, Simon said.

While some people, including one of JiMMYBAR!’s investors, might be concerned that keto is a fad diet and that declining internet searches for the term portend a decline in consumer interest. , Simon is convinced that keto – or a version close to it – is here to stay.

“One of my investors and I used to go back and forth, back and forth, almost to the point of arguing. He said [keto] is a fad and not effective, and I said, ‘Yes, it’s a 100-year-old fad.’ I said, ‘It’s just low-sugar. It’s just a fancy name for low sugar'”and low-carb, which take on different names every few years, but they’re still the main focus of the diet, Simon said.

“Keto is no different from ​[the high protein, low carb diet] Atkins was 50 years ago, except you don’t eat a tub of bacon, and that makes a little more sense, but Atkins is now a multi-billion dollar company. So clearly it works for them,”he added.

That said, he acknowledged that most Americans who claim to follow the diet are “keto-ish” — cutting out carbs and sugar where they can, but not religiously considering the carb-fat-protein ratio that they consume per day.

He added that as more “keto-friendly” products are launched, following the diet will become even easier and attract even more adherents, creating a virtuous cycle to help grow the industry.

Prima Weight Loss UK: where to buy?! Pills Side Effects, Reviews UK & Is It Legit Or A Scam?