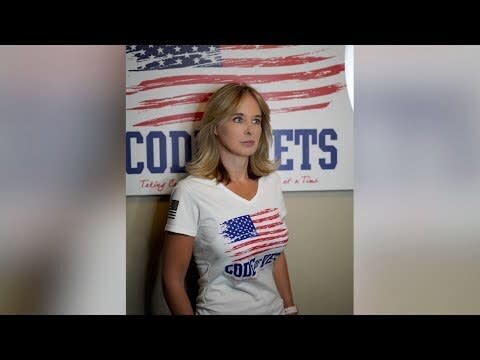 Not only is it a mission for us, but it is a ministry, it is a passion. It is a personal healing journey for my heart.

Not only is it a mission for us, but it is a ministry, it is a passion. It is a personal healing journey for my heart.

Smith grew up in North Carolina, where she was exposed to the effects of war and trauma through her father, Danny E. Smiley. Smiley was a Bronze Star veteran who twice served in Vietnam as an Airborne Infantry Sergeant with the United States Army. Upon his return home, he struggled with PTSD. He sought help from Veterans Affairs (VA) but failed to find the help he needed in his struggles. Smiley would later say to his daughter, “I left part of my humanity in the jungle.”

As an adult, Smith decided to join the US Air Force and had a more positive and uplifting experience with the military. She said, “It gave me a great foundation. The Air Force just instilled in me all the traits I needed to be successful in life to be a part of the greatest nation in the world, and to have served. for her is such an honor. ” Smith served four and a half years in the USAF as a security specialist, where she met her husband, a fellow aviator. After leaving the military, Smith focused on raising his children. Tragedy struck in 2005 when Smiley passed away at the age of 57 from PTSD. Smith will never forget one of their last conversations where he said, “Gretchen, I’m done. I’m tired; they won. I have to go home.” Though moving and devastating, her father’s death was a catalyst for Smith’s most important mission to date: supporting veterans in need.

In 2017, Smith created a Twitter account to share videos about Smiley and the challenges he faced as a veteran. She received comments from other veterans saying how connected they were to her father’s story. It was then that Smith knew she had to do something. She had never run a charity before, let alone decided to start one, but a lack of experience wouldn’t stop her from taking action. “I wanted to turn this tragedy into something good,” she said. “I wanted to create a legacy for my father, and that’s how Code of Vets was born.” Using the power of social media, Smith rallied people across the country to donate to veterans in crisis. Along with many generous strangers, Smith was there to lend a hand if anyone needed help with housing, grocery bills, or medical expenses.

In 2019, Code of Vets became a non-profit organization. Smith and his small team work on a volunteer basis, and only $ 0.02 of every $ 1 donated is spent on running costs. This model ensures that 98% of aid reaches veterans in need. To date, Code of Vets has served over 3,000 honorably released veterans. In addition to providing temporary financial relief, Code of Vets has helped apply for benefits, doctor’s trips and VA appointments, and case management. “We donate money, but there’s a purpose, there’s a plan in place,” Smith said. “This is the real goal of Code of Vets, to make a real difference in their life, in their time of need when they have no hope, when they are in a situation where they see no way out.”

Smith lives in Murfreesboro, TN, with her husband, Joe. Running Code of Vets is a full-time job, but a Smith wouldn’t trade anything for anything. “Not only is this a mission for us, but it’s a ministry, it’s a passion. It’s a personal healing journey for my heart.”

The NFM salute is an initiative in which a member or veteran is chosen each month to be honored as a “salute of the month”. Salutes are selected from nominations on the NFM Salute website, www.nfmsalute.com. The “Salute of the Month” is featured on the website along with a biography and information about his service. NFM Lending will donate to a non-profit organization on behalf of Salute. NFM Lending is proud to donate $ 2,500 to Code of Vets on behalf of Smith. NFM looks forward to the opportunity to continue honoring service members and veterans through the NFM Salute initiative.

NFM Lending is a mortgage company currently licensed in 42 states of the United States. The company was founded in Baltimore, Maryland in 1998. NFM Lending and its family of companies include Main Street Home Loans, BluPrint Home Loans, and Freedmont Mortgage Group. They attribute their success in the mortgage industry to their unwavering commitment to clients and the community. For more information on NFM Lending, visit www.nfmlending.com, like our Facebook page or follow us on Instagram

The “Big One”: How could this affect the central coast?