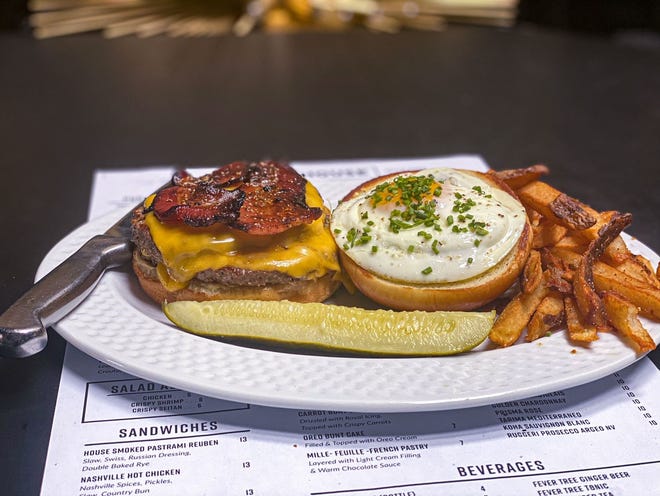 Public House and Garden in Ferndale to reopen with new menu

With renovations nearing completion, Ferndale’s Public House and Garden has set the week of December 21 to reopen.

The restaurant has a new 1,000 square foot garden patio, an updated menu, and two kitchens, including one dedicated to cooking and preparing the restaurant’s new vegan offerings.

Along with gluten-free menu items, vegan makes up a good portion of their menu, according to a press release.

While the menu has expanded to vegan options, it will also focus on gourmet burgers, sandwiches, and sharing platters. The burger is a mix of chopped short ribs, chuck and brisket and served alone with two patties with American cheese, homemade pickles and dijonnaise. It is topped with a fried egg.

Following:Michigan Culinary Gifts 2021: Here’s How To Send A Taste Of The Mittens For The Holidays

The vegan burger is homemade with a mix of barley, carrots, beets and potatoes served with vegan American cheese and vegan dijonnaise. There are vegan and vegan salads and appetizers. A dozen plates to share, including ratatouille and crispy chicken with seitan and waffles, are on the menu.

Chef Anthony Schmitz will lead the kitchens and said that “the use of a separate kitchen prevents cross-contamination between vegan and non-vegan items”.

In 2020, Public House temporarily closed due to the pandemic. Hometown Restaurant Group – formerly the Kramer Restaurant Group owned and operated by Brian Kramer purchased Public House and Antihero nearby. The Working Class Outlaw Group, previously owner of the Imperial in Ferndale, owned both restaurants. Antihero is being renovated.

“Ferndale feels right at home,” Kramer said in a press release. “It’s a community, and Public House is a staple of the community, and I didn’t want to see it closed. ”

The Hometown restaurant group is also running a promotion giving out 50,000-envelope envelopes with freebies and prizes in December to be used from January 1 through February 1. 13.

Her “No-Peeking” gift card giveaway includes thousands of dollars to be used at local businesses in Ferndale. When you visit One-Eyed Betty’s, Pop’s for Italian, or Public House in December, you will receive a sealed envelope.

The envelopes must remain sealed until customers return to one of the three restaurants where they will open the envelopes and reveal any freebies or prizes.

Major prizes include 70-inch smart TVs and a Detroit Zoo family membership. Other prizes include gift cards for use at Hometown restaurants, Ferndale business merchandise and gift certificates.

A complete list of prices, questions and official rules for the “No Peek” promotion can be found at dinehometown.com/nopeeking.