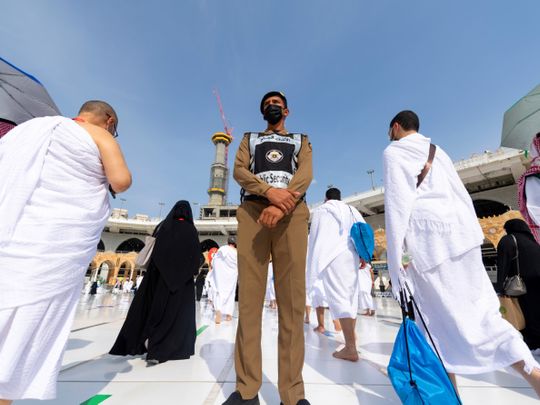 Requests for entry to the Grand Mosque will resume on Saturday

Cairo: The application for a permit to pray at the Grand Mosque in the Saudi holy city of Mecca will reopen from Saturday after the completion of current Hajj rituals, according to a local media report.

Applications must be submitted through the “Itamarnah” smartphone app, the Okaz newspaper reported.

However, reservations to perform Umrah or the small pilgrimage are still suspended, according to the newspaper.

The Saudi Hajj and Umrah Ministry suspended requests for prayers and performing Umrah at the Grand Mosque at the start of the pilgrimage season earlier this month to allow pilgrims to undertake their rituals smoothly and finalize the disinfection of the holy site.

Earlier this week, a Saudi official revealed that Umrah travel would resume later this month.

“At the beginning, the number of Umrah pilgrims will be 20,000 [per day]. The number will gradually increase, ”he told Saudi television Al Arabiya.

The first phase of the plan, which began on October 4, allowed 6,000 Umrah pilgrims from within the kingdom per day to enter the Grand Mosque.

The second came into effect on October 18, allowing approximately 40,000 worshipers and 10,000 pilgrims per day to enter the site.

Up to 20,000 Umrah pilgrims and 60,000 worshipers per day were allowed to enter the mosque according to the third phase which began in November.

Ramadan is generally a peak season for Umrah. Last Ramadan, authorities increased the capacity of the Grand Mosque to reach 50,000 Umrah pilgrims and 100,000 worshipers per day.

Only people “immune” to COVID-19 were allowed to perform Umrah and visit the Prophet’s Mosque in Medina.

Gut health brings low-carb bakery out of the shadows