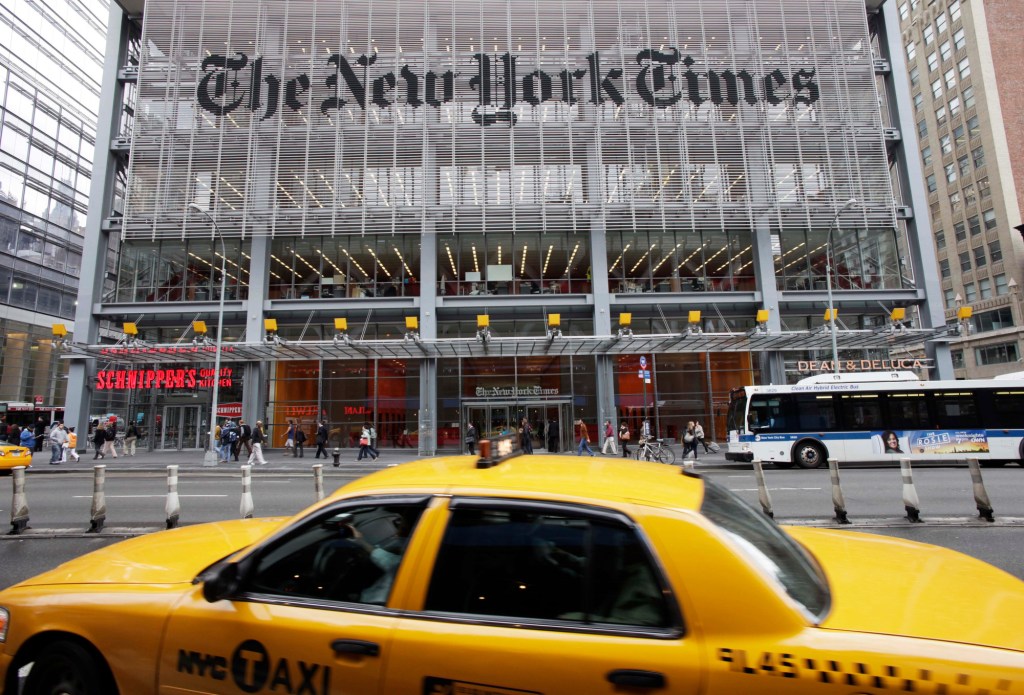 To understand the biases of the liberal media, check out Noam Chomsky – Orange County Register

On August 8, 2016, in the run-up to the presidential election, the New York Times published an article by its media columnist Jim Rutenberg calling on reporters to “throw away the handbook of American journalism” in favor of a “” approach to cover then-presidential candidate Donald Trump.

Rutenberg argued that this pseudo-journalistic approach “may not always seem right,” but “[t]o to do less would be untenable. The column appeared on the newspaper’s front page, suggesting that the biased coverage of Trump was the newspaper’s implicit policy going forward.

We all know what happened next. The mainstream media continued to favor opposition over objectivity when covering Trump. Exhibit A was the incessant media attention to the conspiracy theory that Trump was a Manchurian candidate plotting with Russia. Even after it quickly emerged that there was no evidence to support this inflammatory claim, the mainstream media continued to peddle the story to its disproportionate baby boomer audience who hated Trump and desperately wanted to believe him. The media betrayed its credibility for clicks.

Trump is now gone, but the pervasive media bias remains. To understand how this prejudice works in its least obvious form after Trump, consider the theories of renowned linguist and political dissident Noam Chomsky. Ironically, the writings of this leading leftist explain how the media secretly maintains their liberal bias.

In his 1988 book “Manufacturing Consent”, co-authored with Edward Herman, Chomsky argues that the American mainstream media advance propaganda to serve the interests of the government and the elite. Chomsky and Herman explain how the media achieves this goal in part by filtering coverage through the prism of “worthy” or “unworthy” victims. Stories of worthy victims advance the interests of the state and deserve to be covered; those whose victims are unworthy threaten the power of government and are largely ignored.

“Our assumption,” they argue, “is that worthy victims will be put forward and dramatically, that they will be humanized, and that their victimization will receive the details and context in the construction of the story that will elicit the reader’s interest and sympathetic emotion. In contrast, unworthy victims will only deserve slight details, minimal humanization, and little context that will excite and infuriate. “

Chomsky has most often applied this model to media attention on American foreign policy. Consider, for example, the extensive media coverage of Uyghur Muslims, who are repressed by China, versus their lack of stories about Middle Eastern Muslims who fell victim to the 326,000 bombs America and its allies dropped. in the region since 2001 (around 46 per day). The former are considered worthy victims. They deserve media attention because they advance the interests of the American military-industrial complex. The latter are considered unworthy. Their stories threaten the power and public support of the American Empire.

The practical result of this filtering, Chomsky notes, is the same as if a totalitarian commissioner ordered the press to publicize the misdeeds of his enemies and ignore his own.

Yet this dichotomy can also apply to how the media advance government interests in their country. The press almost universally presents those who suffer in capitalism and freedom as worthy and those who suffer from state intervention and control as unworthy. This filtering strengthens public support for the government’s domestic policy agenda, serving to grow the state at the expense of freedom and economic prosperity.

Chomsky’s model is therefore more useful to libertarians and paleoconservatives, who oppose the welfare state, than to leftists like Chomsky who support progressive policies.

Consider the media coverage of what was supposed to be the July 31 conclusion of the federal moratorium on evictions, which has been in effect for 11 months. Related stories almost universally feature troubled tenants who now face eviction as worthy victims. In a representative article, CBS News highlights Lavita Harvey, a single Las Vegas mother who cannot afford her monthly rent of $ 900. “It’s the hardest thing to see in the world,” complains Ms. Harvey, “when you know you’re a single mom and you don’t have anyone to turn to, you’ll be homeless. These bloody stories reinforce the claim that the government should have more control over housing – a potentially massive increase in state power. They had the desired effect. On Tuesday, the Biden administration extended the deportation ban by two months.

In contrast, landlords, who must find a way to pay off their mortgages without paying tenants, are seen as unworthy and rarely put forward. If the media mention their point of view, it is usually brief, under wraps, and attributed to impersonal “commercial” or “industrial” opposition.

In addition to this dichotomization, the media omits the vital context that threatens the great government discourse. The stories ignore how tenants have had access to extended and expanded unemployment benefits as well as numerous stimulus checks since the start of the pandemic. They ignore how tenants are taking advantage of a burning job market with businesses desperate to hire and record numbers of unfilled jobs. And they almost never provide a critical analysis of how eviction bans hurt the class of tenants they intend to help by dissuading potential landlords from renting space for fear of ending up with. unpaid tenants – a concern that reduces the supply of housing and increases rents.

This dignified / unworthy media framework applies to virtually any press related to domestic politics that would increase the size, reach and power of government. Stories of potential dramatic increases in the minimum wage or other heavy work mandates, for example, always seem to feature single mothers trying to support their families on basic wages.

The views of small business owners, who spent years and their savings opening stores and now face these costly mandates, are understated or even mentioned. The worthy victims described advance the narrative that new or greater government mandates or programs are needed. In contrast, the unworthy victims of the regulations or taxes, debt and inflation needed to fund government programs are ignored.

This media bias is pernicious. It helps fabricate consent among Americans for an ever-expanding state. It is also ubiquitous. Apart from the opinion pages of this newspaper and the Wall Street Journal, hardly a single national daily newspaper regularly features unworthy victims.

Therefore, a large conservative and libertarian media ecosystem operates alongside the mainstream. This alternative medium provides ballast, but it is unlikely to achieve media influence or value among major societal institutions such as schools, churches, businesses, nonprofits, sports leagues and more. Hollywood as its mainstream counterpart biased towards big government.

Perhaps the most overt media bias has officially ended with Trump’s departure. But as Chomsky’s cadre enlightens, the practical effect of the media on advancing liberal priorities is as if he never left.

Jordan Bruneau is a political writer in Los Angeles.

US Direct Loans Do Well After COVID-19 | White & Case LLP

Changing the frequency of your meals could help you cheat death