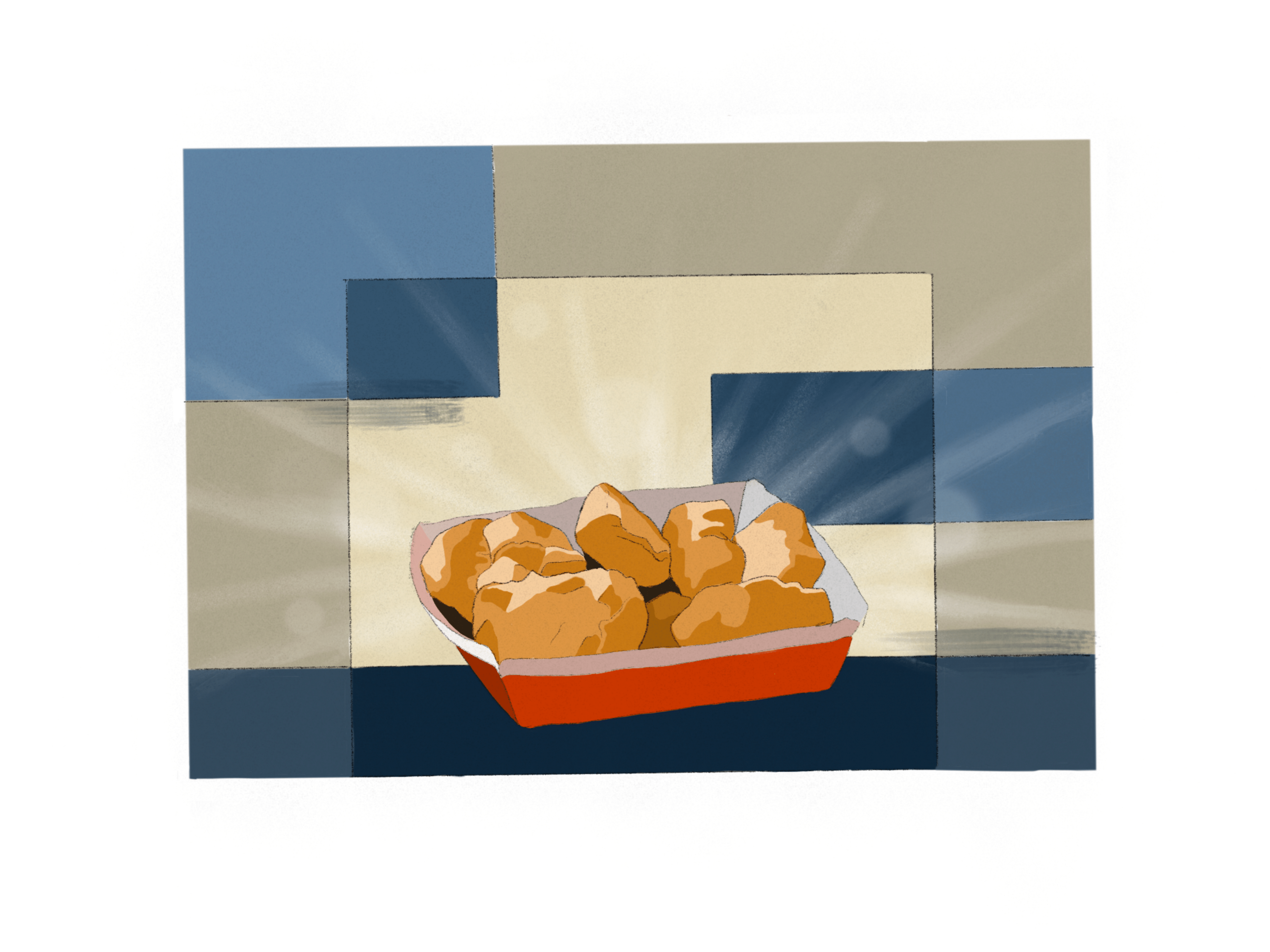 What is a vegan chicken nugget?

If we are what we eat, we are a generation of chicken nuggets. I grew up eating fun finger foods as an after school snack and an easy dinner, sometimes in the form of dinosaurs and Disney characters. Nuggets appeal to even the pickiest (example: this teenager who ate chicken nuggets for 15 years and hardly anything else) and only take a few minutes to prepare. As an adult, I ditch meat for environmental reasons, but join a growing number of nugget-prone consumers opting for meatless alternatives. We’ve created demand, and the best companies are fighting tooth and nail to be our supply. With release after release of new imitations of chicken, fall 2021 is shaping up to be the golden age of imitations of chicken nuggets. What a time to live.

What happens when you take chicken nuggets, an obscenely processed food to begin with, and remove the only recognizable ingredient? The vegan form emerges from the shadows, a mystery meat without meat… so, just a mystery. It’s not just fried tofu. According to the brand, it’s a blend of protein isolate, soy protein concentrate, textured vegetable protein, wheat gluten, and preservatives that no one would recognize. Chicken without chicken is a plethora of paradoxes: both earthy and man-made, highly processed but classified as a healthy alternative, plant-based but without any recognizable plants (clearly made inside a plant, however). They taste eerily similar to the real thing, a pinnacle of food science.

Vegan chicken nuggets are also part of a nugget-obsessed culture because they are more than just food. A generation of young people use “chicken nugget” as a flirtatious term and stick slogans such as “nugs not drug” and “nug life” on water bottles and laptops. Such phrases signal not only an affinity for breaded chicken, but also a conscious lameness, a message that the nugget lover is down to earth and easy to please.

“Even though I look like a burnt chicken nugget, I still love myself,” a small child said in a 2016 Vine.

“Chicken nuggets are like my family,” says another child in another viral video, before eating the breaded poultry for breakfast.

The most retweeted tweet in English is a 17-year-old’s attempt to win free Wendy’s chicken nuggets.

One of RedBubble’s chicken nuggets products is a shirt that says “Chicky Nuggies” on top of an image of Yoda eating nuggets. There is a sticker that says “26.2 (chicken nuggets eaten)” and others that say “Netflix and chicken nuggets”. Chicken Nuggets have transcended subsistence and entered the realm of cultural obsession – similar to Trader Joe’s and Wine, two other consumables with excellent PR. Buying nuggets brings back memories of childhood family dinners and date snacks, simpler eras and simpler kitchens. You don’t need the chicken itself to have the same nostalgic experience. Much like alcohol-free wine (which is growing in popularity), chicken-free chicken isn’t just about taste – it’s about being part of the culture. Fake poultry fried confections, despite their obscure ingredients, meet a need: a cultural weak point and growing market share.

Fake nuggets are filling my freezer. Right now my roommates and I have four different brands, each packaged in earthy green tones and labeled with phrases that bypass lawsuits like “chicken-free thongs” and “chik’n”. One brand is Boca, a loyal vegetarian brand launched in the late 1970s (now owned by Kraft Heinz) which claims “the original vegetarian nugget”. I find their nuggets to be quite similar to those from Morning Star Farm (owned by the Kellog Company), another decades-old company: powdery, not too greasy breading. By contrast, Raised and Rooted nuggets (owned by Tyson Foods) are a greasy nostalgic trip to McDonald’s gaming spots; they diffuse umami flavors throughout the house and pack a deliciously huge calorie punch. We also bought the Earth Grown, Gardein, Trader Joe’s and Whole Foods brands. Lightlife has new fillets and fillets, MorningStar has Incogmeato Chik’n and Nestlé is also investing in fake meat.

It’s a crowded market, but two booming rivals monopolize a lot of recent press: Impossible and Beyond Meat. Like Coke and Pepsi, the Whopper and the Big Mac, Starbucks and Dunkin ‘, the biggest difference between the two powerhouses is the brand, not the products. This year, Impossible and Beyond stepped away from fake beef and attempted to recreate some high-profile chicken.

The False Meat Giants, which have millions of dollars in seed funding, are focused on converting meat eaters. This month, Impossible came out with some new vegan nuggets, and rival startup Beyond Meat is also hitting the freezer aisle. After ditching his disappointing chicken imitation in 2019, Beyond is trying again. Its bean-based offerings, which have been in restaurants since July, hit grocery stores like Walmart in October.

Alongside the big rivals is the cool kid of fake meat startups, Simulate (formerly Nuggs), led by a 22-year-old Australian named Ben Pasternak. The company is a media darling and its branding is unconventional – unlike other brands’ earthy hues, Simulate is less “vegetarian” and more “edgy”. In a recent post, the brand’s official Instagram account parodied social justice slideshows with an absurd story about Iceland. It begins with “What is going on in Iceland right now and how you can help” and then describes “the friend Jared” of a narrator who said the narrator has “mouse hands”, this which is so rude of him, because he knows that I am so sensitive to my little hands. Later, the post shows a drawing of the narrator’s hand with a Nugg for the ladder. It didn’t make sense, and yet that was the point.

Infused with last-minute meme culture and a whopping $ 44.99 for a penny pack, the brand is positioning itself as the “Tesla of Chicken Nuggets.”

Vegetarians are no longer hippies. Looking behind the opaque walls of the meat industry can radicalize even the avid carnivore, and the younger generations care more about the environmental impacts of what they consume. As observed in the rise of alternative milks, a climate-conscious culture is now inviting vegan products – intentionally vegan products – off the health food aisles and on end caps and advertisements: prime real estate from the grocery store.

When I was 15, I abruptly quit meat after watching “Cowspiracy,” a documentary that exposed the pernicious weather effects of the ranching industry. Some of his facts and tactics were misleading, but his message holds true: Eating large amounts of meat is not sustainable. A 2018 study published in the journal Science found that while meat and dairy provide 18% of the calories and 37% of the protein in our diets, they use 83% of farmland and produce 60% of greenhouse gas emissions. greenhouse of agriculture. These statistics have definitely changed the content of my plate.

Now, I’m not only proud to have a climate-friendly diet, but thankful that it’s easily achievable. It’s rare that I find a restaurant without a meatless option, and even the fast food giants are avoiding meat menus at an astonishing rate. Passing on meat seems pretty normal, not alternative. More than ever in recent history, the world is aimed at vegetarians.

Why can’t the chicken cross the road? It’s too big to walk

The imitation chicken has a moment half a century after the processed chicken itself captivated the world.

If capitalism grows like a tree, the chicken nugget is its fruit: Born from an oversupply of poultry in the 1950s and 1960s, it took your grandmother’s chicken dinner and made something boneless, breaded, fried and packaged. Marketing efforts promoted the idea that the real hobby was not cooking, but that consumption and nuggets allowed home cooks to sit back and relax. Rather, the work you once endured preparing dinner was done by an amorphous supply chain. The chicken nugget is, to say the least, easy to prepare.

Decades later, humans have a chicken habit of $ 66 billion a year. We have reduced their growth time to a third of what it once was and raised birds that are almost three times the size of a century ago. Chicken is the most popular bird in the world.

The ingredients in the chicken nugget, while questionable, don’t seem to bother people. The pink slime panic has lifted, headlines about lighter fluid in chicken have waned, and the unpronounceable derivatives of petroleum and corn weren’t enough to deter everyone. Celebrity Chef Jamie Oliver showed a group of elementary school students how chicken nuggets are made.

“Does anyone want one?” He asked after his stomach-breaking demonstration. When the children raised their hands and leaned over the plate, the camera turned to the chef’s disappointed expression.

Much like the ability of traditional chicken nuggets to transcend bad press, fake chicken nuggets have not been put into place by criticism of their ingredients or their carbon footprint. Despite being ultra-processed and wrapped in plastic, a nugget forged from soy can still look greener than the real thing.

Little research has evaluated the climate impacts of fake chicken, but it are studies on the promising effects of faux beef. A 2018 report commissioned by Beyond Meat and produced by the Center for Sustainable Systems at the University of Michigan compared the Beyond Meat burger with beef. They found that the Beyond Burger generated 90% less greenhouse gas emissions and required less land, water and energy.

Raising chicken isn’t as bad for the planet as raising cattle, but vegan chicken nuggets are part of an energy-intensive supply chain and they’re not as green as eating beans and rice, but they are a step in the right direction. direction.

Every time I go to the grocery store, I look for a new brand, knowing that I will be going for the fake meat on a night when I don’t feel like cooking. Dipped in spicy aioli and served with carrot sticks and a pickle, they look like something I would eat for lunch on a Saturday afternoon in sophomore, but dressed a bit to account for how I grew up.

As weird as they are, the vegan nuggets seem to be here to stay – even with its disconcertingly complex concoction of oil, wheat and soy, complemented by marketing strategies of unusually placed apostrophes and misspellings. intentional. They are not cheap; they are not in good health; they’re not outside of the sprawling farm complex that I like to avoid. Still, I keep coming back to it, and for some reason I can’t exactly put my finger on, I don’t see it changing anytime soon.

Declaration correspondent Annie Rauwerda can be reached at [email protected].

How to make homemade granola bars