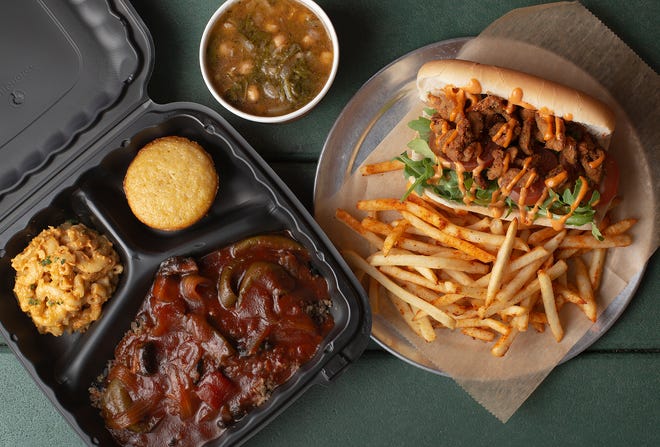 After meeting the city’s first vegan soul food restaurant, there is only one question to ask: what took so long?

After all, we live in a vegan city that has recently spawned vegan delicatessens, vegan butchers, vegan burger shops, vegan Mexican-American restaurants, trendy and fancy herbal restaurants, as well as a two-link chain of places serving vegan Ethiopian food.

The new restaurant in question has a name that might defy the spell check, but the place is easy to love: Willowbeez SoulVeg. Willowbeez SoulVeg (maybe repetition helps familiarize word processing) is new to the Downtown North Market, but it’s not exactly new. He’s just got a new stable gig.

The family-owned business, which lists Carnell and Malik Willoughby as founder and co-founder respectively, has been around for nearly a decade as a pop-up and restaurant operation. This experience is evident in the appealing flavors and textures of some very distinct dishes.

The food is ordered from a predominantly green and yellow stall which is playfully decorated with honeycomb images and other apian references. I was informed by a waiter that these bee hints are just family having fun with their last name. Still, I couldn’t help but notice that while buzzing to fill orders quickly, the Willoughbys seemed to be just as busy as, well, you know.

What they serve is often so scarce but compelling that it can be as difficult to categorize as stopping eating. In general, however, Willowbeez cooks boldly flavored vegan dishes that are sticky to the ribs – not an oxymoronic description, by the way – that often looks to New Orleans for inspiration.

Get news and entertainment delivered to your inbox: Subscribe to our daily newsletter

Cornmeal is standard in Crescent City’s fried fish mixes, and it gives a crisp, golden-brown crust to No Fish Fry ($ 12). The eponymous ‘No Fish’ component was three large pieces of banana blossom – Willowbeez is the only Columbus restaurant I know of that regularly uses this intriguing ingredient, which evokes a cross between artichoke hearts and mushrooms.

The fake fine fish was accompanied by a tangy homemade remoulade sauce, a house coleslaw (tangy, “creamy” and addictive), as well as excellent fries sprinkled with paprika (the smoked paprika is big here), a barbecue-like spice blend.

BBJerk Bella ($ 14) was as unusual as its name, but in a good way: a huge and filling stew made with quinoa, black beans, onions, peppers, tomatoes and mushrooms cooked in a base of smoky taste and spicy barbecue sauce. It’s served with a good cornbread muffin and a side dish, like a vibrant curry puff or the eccentric title “Mac & Plz”, a heartwarming yet tangy take on mac and cheese.

Show up for a light meal and the soup of the day will cover that bill. If it’s the Spicy, Interestingly Fruity Left Eye Soul Chili stuffed with beans and veggies ($ 6, with a cornbread muffin), it’ll fill your tummy, too.

Show up on weekends before 2 p.m. and order from the small brunch menu. Its offerings include a must-have side of smoked oatmeal and “cheese” ($ 4); the pleasant BK Sammich ($ 7) – a fairly believable vegan egg, sausage and cheese sandwich on whole wheat; a serving of delicious French toast big enough to feed the whole country of France ($ 9) which arrives topped with caramelized bananas and so-called candied nuts (mine was MIA); and the All In Wrap ($ 9) – a panini-squeezed mammoth burrito, filled with quinoa, spinach, herbed-enhanced ‘sweet purple potato mince’, plus turmeric yellow tofu replacing the eggs. . Like many dishes here, this satisfying burrito was as idiosyncratic as it was healthy and tasty.